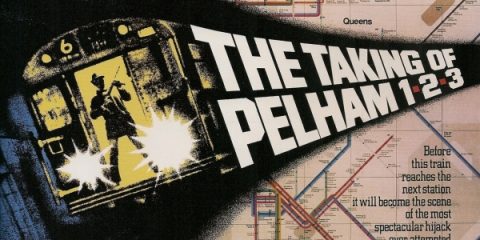 Actually, this is not an original cut from ’74 film “The Taking of Pelham 123“, but I was pumped to see this (apparently) voluntary/tribute footage on Youtube. The editor succeeded in reviving the coolness of David Shire’s theme song in a very modern and creative way, without negating its original role, significance, and atmosphere in the film.

As you might know, David Shire is a prolific film composer who is especially famous for his music on “Saturday Night Fever.” Since we are already too used to this kind of ’70s Jazz Funk music as typified by Lalo Schifrin‘s compositions, it might not appear so fresh even if you listened to the music for the first time today. But I believe this was one of the first epoch-making attempts to synchronize funky “grooves” with crime/action movies. And this “Archetype of Cool” has been followed and expanded by numerous filmmakers and composers to this day.

When I saw this tribute footage, I felt as if the editor were rebuilding and revolving the past archetype from the present point of view, by making the most of the resources which we have acquired by now, including patterns, signals, techniques, cliches, etc. And what fascinates me is he did not only avoid “making just another cliche” but also aroused our interests in a fresh way that the original trailer hadn’t.

I couldn’t devote much space to the music itself, but if you’re interested in 12-tone techniques which Mr. Shire adopted in this theme song (which was groundbreaking), I would recommend you google it.

We have just published a new video clip featuring Tatsuya’s [...]

Originally, I tend to watch movies (including films, TV dramas, documentaries, whatever) analytically, focusing on how music/sound is related to/synchronized...