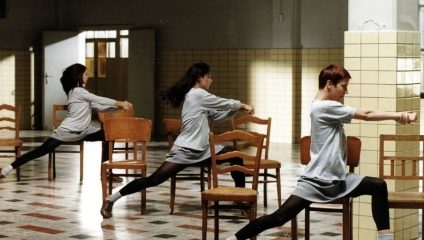 More than ten years ago, I was kind of infatuated with performances of several contemporary dance companies including Jiri Kylian‘s Nederlands Dans Theatre and Anne Teresa‘s Rosas. What fascinated me was not only their sophisticated choreography style but also the way they used music. Suffice to say; I was “reversely” inspired as a composer by how they designed several elements such as time, space, and sound, not in a superficial way but in a more philosophical way.

Today I’d like to introduce Rosas’ “Rosas Danst Rosas” (which I’ve already mentioned on my Japanese blog, using an analogy from Ikebana). When I came across this, I felt it fit into my sense without any discomfort or awkwardness (which we often feel when we encounter contemporary art performances). Their moves looked natural and sophisticated, not because of “being creatively free” but because of “being strictly controlled.” In other words, it is well calculated. However, the calculation includes no attempt to pretend to be eccentric or extraordinarily different.

Early contemporary or avant-garde artists, not limited to dancers, used to pursue literally “creative freedom.” They aimed at breaking pre-existing formulas/rules and unleashing themselves through their often spontaneous and abstract expression. Therefore, some performances seemed eccentric or even purposely come off being awkward.

On the other hand, while early minimalists challenged new formulas/rules and pursued them strictly, most of their works still seemed similarly awkward and unnatural. I think that was because they had to emphasize the significance of presenting new formulas, or attitudes. That was, in a way, inevitable because in the contemporary era, to appeal “something entirely new” (regardless of whether it’s formulated or freestyle), i.e. to defy something that already exists, has been prioritized over fitting naturally into audience’s senses or imaginations. As artists, they couldn’t allow themselves to pursuit a (lukewarm) balance between them since it could undermine their creativity and raison d’etre. We could call it now an unrewarded struggle for “art for art’s sake,” but the effort was imperative for the evolution of contemporary art.

By contrast, these dancers and choreographers seem even to enjoy achieving the balance. That doesn’t mean they think inside the box or mold ourselves into a cliche/déjà vu. It seems to me that they pay much attention to presenting a new way of re-designing or re-organizing all pre-existing and familiar elements surrounding us such as time, space, and sound. Although they don’t take an approach to show off their novelty blatantly, this is amazingly fresh, and undoubtedly I can catch their creativity and POP in this video.

Though I’m not sure the POP feel attracted creative people in the advertising and music industry, it’s funny we frequently come across commercials and music videos which were likely to be affected by this and fell into following the “formula,” not their underlying (or intrinsic) creativity.

If you are captivated by the video, I’d recommend you check “Fase” video as well (I have this DVD).

Differences in Sync Licensing between Japan and the US -Part 2-

Here are the things you should know before having sync licensing deals with Japanese companies. Be attentive to what JASRAC...