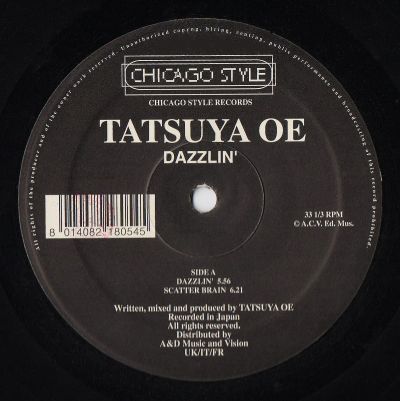 Oe’s career as an electronic music producer started here. In 1995, he bought an AKAI S3000 sampler and began to make dance music with his laptop computer, Apple Powerbook 145B. That was not as a hobby but for becoming a professional DJ/musician. In fact, his master plan at the beginning was to launch his own record label and release tracks of dance music creators he liked. That said, he had no idea of how to find those people in or from Japan, where at that time few were making his favorite, strictly DJ-oriented house/techno tracks. Moreover, he didn’t have enough funds to make his dream come true, that is to say, to press vinyl records. For that reason, he decided to make music by himself and have other record labels release it first so that he could learn how record labels work and, more importantly, earn enough money to launch his own in the future.

He began to send his first four or five “straight-ahead, funky techno” tracks to some of his favorite labels and dance music magazines both in Japan and European countries. While he never got any feedback from Japanese labels and magazines, surprisingly, most of the leading techno labels in Europe to which he had sent the demo tapes, including ACV/Chicago Style and R&S records, contacted Oe.

The feedback from ACV was extremely candid and simple; they faxed him a record contract to release the first 12-inch single from their label. After careful consideration, he signed and faxed it back to Italy. Oe was so excited to close the “deal,” but it remained to be questioned how and when it would take shape.

Half a year later, in the late Spring of 1996, unexpectedly he came across this debut 12-inch vinyl at HMV Shinjuku when visiting the store on his way home from work. Soon after that, Oe came to realize that his name had been gradually spreading over Japanese techno DJs through record shops and nightclubs in Tokyo.

[Playlist] This is Captain Funk (Curated by Spotify)