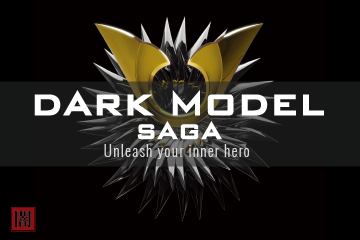 It is less than a month to go until Dark Model’s new album “Saga” is released. I picked “Survivors” as a teaser and uploaded it on Youtube. Not only does it construct orchestral and symphonic sound (which is signature to this project), it also features a lot of disco & electronic funk elements which I have embraced through my career. Hopefully, both fans of Dark Model and Captain Funk will like and enjoy this track.

Just “Orchestra + Electronic” is not enough

While I would like to detail the concept and artwork of this album next time, I will focus on the production side, including a backstory of this song and what I prioritize when creating music as Dark Model.

While I was able to shape the framework of this track at the relatively early stage of the album production, it took further work to complete it as I had to spend a considerable amount of time tweaking the arrangement and mix. In the case of Dark Model’s music, orchestral instruments play the main role in the arrangement, which is pretty rare for electronic/dance music. Having said that, if I tried to create dance music by relying on orchestral instruments too much, instead of using synthesizers sufficiently, the sound of the music would be utterly weak in terms of dynamics of sound and sharpness of rhythm.

Synthesizers as an “unthanked” tool

Not to mention that synthesizers are indispensable for the production of electronic music, but when it comes to making rock and pop music, they are considered to play a more “backseat” role (or even to be dispensable). From the standpoint of modern recording engineering, however, synthesizers are robust tools that can also be used as a catalyst to enhance the quality of music production. They work in a quiet but dramatically effective way. Not only can they stabilize the low-frequency part of your track (such as bass and kick sound) and enrich the mid-frequency part, it also can breathe life into the rhythm by adding brightness to the high-frequency part (such as hi-hats). I believe that even pure classical music and ethnic music which are played by only raw instruments could benefit by putting synthesizers/electronic elements as a secret ingredient. They are go-to guys who are also willing to be an “unthanked” tool.

Regardless of this track, when creating Dark Model’s music, I make it a point to pay attention to how much electronic elements can enhance richness and epicness of the world view constructed by orchestral instruments such as strings and horns, without ruining them (which tends to happen to remixes of non-electronic music tracks). Unlike film soundtrack and game music, however, in the music of Dark Model, electronic elements such as beats and synthesizer sounds still play significant roles as well. Sometimes I am asked, “What’s the trick of blending orchestral and electronic elements? How can you nail it?” Unfortunately, there’s no silver bullet for it. There’s no such thing as good reference music for the project. On top of that, the ensemble and the number of instruments used in Dark Model’s music vary a lot from track to track. All you can do is try to take the time to find out the best arrangement on a track basis. That is to say, dissect and improve your music until you reach your own answer.

Dissect and articulate your music

For example, it is important to find out two types of sounds included in your song/track. One is the sound which exists subtly but contributes substantially to the color of the track (which includes what I would call “ghost” notes, not limited to drum sounds). The other is the sound which plays a significant role but could be a conflict with the effect of other instruments. By emphasizing the effect of the former and controlling the latter carefully, you could keep or bring out the dynamism and articulation of your music. To put it more concretely, I would recommend that you make full use of automation functions by programming the gain and frequency parameters of (almost) every track, as well as plugins such as compressors, gates, and EQs. Make sure that all tracks interact with each other in terms of dynamics and rhythm, just like a seesaw. (If you’re interested in the details of this technique, try searching “mixing automation tricks,” for example.)

Originally, orchestral instruments should not be cut out for rhythmical and uplifting performance. We already know there are a lot of great “dance” tunes and performances in the world of classical music. Maybe we should note that, however, especially in modern popular music (including electronic music, of course), there is a tacit understanding that only the final mixes can come into existence or be judged as what you want to tell through the music. In the mix, all the recorded musical information about the track, including not only its melodies, arrangements, performances, and sound choices but also its sound processing techniques such as dynamics, effects, and localization, is fixed and taken as your final decision. That means, technically, we enjoy the circumstances/settings where the music was recorded. And we, modern music listeners, are very fastidious about its quality. That situation is different from that of classical music (while the quality of performance and recording is essential in classical music as well).

The progress and the changes of rules occurred in the field of the recording/sound engineering have changed how we enjoy music dramatically. If you didn’t spend enough time taking your mix to the level of our “modern ear,” regardless of whatever instruments you may use, the result could be disastrous. Don’t take this the wrong way, but human performance could sometimes be an element which ruins sharpness of the sound and even concept of music, depending on how you use it.

We sometimes come across performances which feature a live orchestra and a dance act/DJ and don’t sound as tight, sharp, or well-mixed as expected. I guess that’s because no one in the dance crew has enough knowledge and experience to understand the difference of sound characteristics between the two and organize them. Were it a performance of classical music only by a live orchestra, the conductor would play the role. But if it were a collaborative performance like mentioned above, it’s impossible to expect the conductor or the orchestra to have an ear as keen as modern recording engineers. It would be necessary to take the time to communicate with conductors, orchestras, and PA engineers beforehand so as to close the gap between you and them all. Before that, we shouldn’t take it for granted that any recorded musical work can be live-performed. To me, they are completely different art forms which are based on different concepts and techniques. I’m wondering why, when it comes to music, many people fall into the trap of “performance supremacy.” On the other hand, few who are moved by an intricately drawn animated film or an epic spectacle movie featuring super high-end computer graphics would say, “I want to see this masterpiece live-performed by real actors on stage!”

(Japanese edition of this article: https://www.tatsuyaoe.com/findings/dark-model-saga-backstory-1-survivors/)

Set out below are Frequently Asked Questions (FAQs) regarding Dark Model (Tatsuya Oe) and the music. Hopefully, you find these...