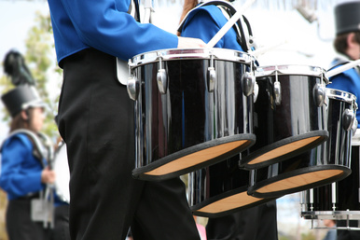 Introduction – What is drumline music? –

Drumline is the word that I used for a description of Dark Model’s track “Moment of Truth” in the interview on the Independent Music Awards. Since the American musical/drama film “Drumline” became a box office success in 2002, the word has become a household name. The word itself is originally a technical term that means general percussion ensembles played by musical groups such as high school marching bands and military bands. On Wikipedia, a drumline is described to be “a section of percussion instruments usually played as part of a musical marching ensemble.”

That being said, I think I still should introduce the famous battle scene of Drumline here. While the soundtrack is supposedly built up for effect, it’s still a great example that presents the best part of drumline and the enjoyment of the audience in an exhilarating way.

The very first time I got interested in the sound of drumline and marching drums, actually long before the movie released, was in my childhood. I was drawn to drum sounds played from elementary school and junior high school brass bands, which still can be seen there as I saw back then. I remember it looked a bit magical for me; how just two drumsticks can produce such a powerful sound, rhythm patterns, and expressive drumrolls. The music they performed at that time, however, was mainly classical or corps-style music that exemplified very traditional styles of marching music. In other words, they were “not so groovy.” That is why, it took me a long time to find common ground on rhythms and ensembles between marching music and groovy modern music like Rock, Funk, and Disco that I deeply got into as a listener.

Looking back, I could recall a couple of “marching drum meets modern music” experiences, though. For one, there was a bandmate drummer in the junior high school who had been practicing basic rhythm patterns of marching drums (which are generally called “rudiments”) very hard, and which made me think that learning how to handle sticks in the traditional manner must be essential even for playing rock music. By the same token, Billy Cobham, a legendary jazz drummer I liked and listened to especially around that time, whose play was quite impressive and had something in it. Finding out his roots later, I learned that he had been in a U.S. Army band in early life, which made sense to me. However, I still hadn’t got the point of drumline.

Later on, I started to listening to world music such as Latin American music and Asian music, and I got so into them. That experience allowed me to expand my interest in “groove” to the realm of marching drums as we call drumline. In the 80s and after, musicians in various fields from various countries have absorbed the performance techniques and the grooves of Samba/Batucada (the video below), Hindi and Bangla dance music, and even Japanese Taiko music. They have developed those elements and incorporate them into very modern styles creatively. So we could say that the marching drum music you hear in the film Drumline, which is a new “groovy & funky” type, also came through those cultural interactions.

This footage is a real battle between Air Force and Army. I bet you will be blown away by their flawless performances and the rich rhythm patterns they make.

Momentum and marketability of drumline music

Aside from the movie soundtrack of Drumline, it seems there are not many CDs and records of drumline and marching drum music commercially available on the market. I think that is very unfortunate. Like the video below, drumline music can become more accessible to many listeners by covering and arranging a popular song. As far as I see it becoming popular on Youtube, I don’t believe drumline music has no place in the commercial market. I do feel, however, that it is unlikely that present major record labels and music publishing companies will become keen on investing their money in this type of music (, which may hold true with Epic/Trailer music as well).

Even so, drumline has already been gaining its momentum. Instrument Players’ attentions are really getting high enough to send me an email message asking, “Is there any way to get sheet music of Dark Model’s tracks (such as “Moment of Truth” and “Hope is Never Gone”)? We, as a marching band, would love to perform your songs in our high school!” While I haven’t published any sheet music of those tracks formally yet, I’m grateful for their keen interest in performing my music in their bands. I will consider the demand more seriously.

A couple of tips and talks for Electronic & Dance Music producers

Now, when it comes to electronic musicians and producers who don’t play real drums, how could they make realistic sounds of drumline?

To express the dynamism of drumline music, I think you would need to collect decent audio sources in the first place, and also it is important to work out MIDI programming. I haven’t used it yet, but a company called Tapspace offers a sound library named “Virtual Drumline” (Amazon), and the sounds in the library can be played with a software sampler Kontakt of Native Instruments. You can also use the library in conjunction with music notation software such as Sibelius and Finale. If you would like to try computer programming of drumline music, might be worth checking it out on their website.

As to other sample libraries/virtual instruments, Soundrion “High School Drum Corps,” Sample Logic “Rumble,” et al. have been released. Some libraries of virtual orchestral instruments (such as East West Quantum Leap series and Vienna Symphonic Library) have snares and drumroll sounds that are useful for programming drumline sounds. You may want to try those tools according to the sounds you want.

In point of MIDI programming, basically, you would need to program one by one from top to bottom because there is no magic tool like a “MIDI library for drumline music.” Besides, drumline is of course played by more than one person except when playing a solo part. So you will need a large number of MIDI tracks even for one rhythm pattern. Regarding some sample libraries, their kits originally include complex sounds (such as flams and short rolls) per each note. But if you want to make them by using only a single snare sound, I recommend you pursue realistic feelings by nudging notes, changing their velocities, hitting them manually at a half speed of the track, etc. Just be sure to control the phasing and make each element sound right in stereo.

Several plug-ins so-called “Drum Replacer” (article on Sonicscoop) have recently been available on the market, which can analyze drum patterns by capturing audio and convert them into MIDI. However, it doesn’t seem a proper gadget to analyze drumline patterns accurately since they have very subtle nuances and are usually played by multiple players. Instead, I recommend you program many rhythm patterns for rudiments/paradiddles with using a keyboard (or by playing a digital percussion instrument compatible with MIDI) on a routine basis and stock them as MIDI files. It might be better to practice and re-create rhythm patterns with a percussion instrument like a Cajon rather than a drum kit because it allows you to focus on making rhythm “patterns,” not “sounds.” The work must be hard, but it will still be easy compared to a lot of practices that real drummers and percussionists make.

Disclaimer: Tatsuya and this website have no affiliation to and is not associated or sponsored by any of these companies except Amazon associates program. We shall not bear any responsibility for any damage or loss which may be made by purchasing or using these products mentioned here. Thanks for your understanding.

I had the opportunity to have an interview with Richard B Roberts, very talented art director and digital artist based...